After a casual, but hefty breakfast of eggs, bacon, sausage, toast potatoes and french toast, we finished packing the gear and brought it down to the lobby of the hotel.  A nice man offered us his truck to portage back to the river. Paul, Zach and I portaged the boats. We struggled, as we hadn’t portaged, really, in weeks.

On the river, we sweated through our first summer day paddling heavily loaded boats up the Saskatchewan River.  We talked to some locals fishing on the river who told us we could stay on their property up the river. We stopped to camp at a cabin that may or may not have been the aforementioned cabin.  Alfredo spaghetti with tons of pork sausage for dinner.

P.S.  Tonight’s dinner was the only dinner we did not finish! We left about one heaping spoonful, which was buried by Axel…after a valiant effort.  The meal consisted of pasta, alfredo, milk powder, cheddar cheese, parm cheese, pork sausage, bacon, pemmican, summer sausage, butter, oil and spices. It was wild!

After dinner some fishermen rolled through asking who we were since we camped on their friend’s property.  Arch & Guy said, “Ben probably wouldn’t mind if you camped here.” Then they offered to host us tomorrow night.  Perhaps we will do that. Thanks Ben, Arch & Guy!

It rained through the night on Cedar Lake.  A thunderous boom woke up nearly everyone around midnight.  We intended to break camp around 2:00 a.m. but rain and wind prevented us.  Was not until 6:00 a.m. that the rain stopped and the wind subsided.  Having laid over the day before, we were all eager to get moving.  We had to get off Cedar Lake today.  Granola – no coffee for breakfast.  Many of us took caffeine pills.  We made good time across Cedar with minimal winds, eventually getting to the marsh near the Saskatchewan River (SR) around 10:00 a.m.

Navigating was difficult so we flew the drone up and could easily find our way.  The drone is an advantage I will surely miss in the trips to follow.  Paddling upstream on the SR made for slow progress but we pushed until around 7:00 p.m. when the sun had finally gotten the best of us.  This river is very muddy but we managed to find some rocks to unload on and an elevated straw/tall grass campsite.  With no trees there is no shade.  Our tents are baking in the sun.  I am sweating profusely writing this…it sucks a lot.

Today was a good day overall but I am sunburnt, exhausted and in for a brutally hot night of sleep.

Chili mac for dinner.  The Pas tomorrow, which all of us are very much looking forward to.  Unfortunately we will only be able to spend a few hours with Buch and John.

Too hot to write more.  One quarter of the trip nearly complete!  It’s wonderful and fine!

We woke up at 4:50 a.m., having slept in.  It was probably a good thing we did though, as we would need the rest on what turned out to be a hard, wet day.  We got on the water at 6:15 a.m. and were immediately greeted with a stiff eastern side wind. It was a tough way to start things out, but it would be a harbinger of things to come.  It wasn’t all bad, as the wind aided us after we completed that seven mile stretch. We would push hard all morning beneath a cloudy sky that always held the threat of rain, taking reprieve from the biting wind during our short breaks.  The winds and waves caused some uneasy paddling during some open water crossings, but nothing beyond our comfort zone.

After lunch the rain finally hit us.  It never pelted us, but it was most unwelcome after a cold morning of general wetness due to the waves and side winds.  As the afternoon came to its end, we had already paddled over 30 miles. Having set ourselves up in good position to reach the Sask (Saskatchewan) River before lunch, we decided to camp early and start earlier tomorrow.

The Pas, here we come.

P.S.  We cannot wait to get off this lake.  The gnats fly freely upon this shallow, marshy place.  Campsites are difficult to come by and the water tastes as if it sprang from a beaver dam.  Not trying to vent here, but I cannot wait to escape this forlorn, shallow, swamp.

At 12 a.m. I sat awake in my bag. The air was calm. All of a sudden, a huge gust of wind broke the still of the night. Every hour from 2:30 to 7:30 a.m. I set an alarm to wake and listen to the wind and the waves. They crashed on & on. At 7:30 we made coffee & broke camp to try to make the final push to Grand Rapids, the end of Lake Winnipeg. The waves were large, but manageable & we turned off the lake after a good stretch. Spirits were high as we reached a dam. We started up an ATV trail before happening on a road. We decided to stop and ask a driver for help. They gave us a ride 2.5 miles down a road to the other side of the dam, Cedar Lake. We made some good distance, pushing hard to make the Pas in 3 days to meet Buck. So far it looks possible. Wind dependent. It’s great to have Winnipeg behind us with a new challenge. Hitting it hard again tomorrow.
-Bram

We had an early morning – 2:00 a.m. so that we could beat the winds, on the water by 4:00 a.m.  It was a surreal paddle. The moon was nearly full and shone brightly on the water, by the end of our second morning stretch the sun was rising and it looked like candy.  Bram made the comment on the first stretch that it felt like we were doing something illegal.

It must have been the gravity of the situation and our determination.  By snack time there was a mutual feeling in all of us that we could get used to this.  By lunch-time we had paddled over seven hours and were effectively wind-bound on a rock point before a large and exposed bay.  We all ate our PB&J’s and took some rest on the sandy beach. We slept damn near four and a half hours before we cooked a delicious spaghetti Alfredo dinner.  Best meal of the trip so far.

Around 7:00 p.m. we looked across the lake and realized that, although windy and wavy, we could paddle.  So we did. The stretch took us about 1.5 hours. We ended up camping on a sandy peninsula where we were approached by the friendly couple that owned the land.  They were generous and offered us their land to stay on and their cabin if we needed anything. Another 2:00 a.m. wake up tomorrow.

Woke up at 4:00 a.m. and got on the water at 5:00 a.m. We did a short stretch to the beginning of Lake Winnipeg. The winds were not bad during our stretch across Traverse Bay but once we left, the wind/waves got significantly larger. We hugged the shore since the winds were from the northeast. Stopped for lunch around 1:00 p.m. and had PB&J’s. I was exhausted so it was delightful. At lunch we talked about how we were going to handle Winnipeg and decided that we need to get up at 2:00 a.m. since our progress was slow. We left after lunch and the waves/winds got even bigger. So, we did a small stretch and called it quits since it got steep. We stopped around 3:30 p.m. and camped just short of Poplar Point. We ate chicken and dumplings and went to bed early to get ready for the early mornings ahead.

Today we woke up at 4:30ish, skipped breakfast and got on the water early in order to beat the wind on Lake Du Bonnet.  The lake was glassy and beautiful.  Once we hit the north end we stopped for granola and peanut butter, which was delicious.  After that, the day can be summarized by headwinds and portages.  All of the dams are ugly (in my opinion) and the portages are not clearly marked.  On one portage, around Great Falls Dam, we ran into some very friendly Canadian fishermen. Trevor and David gave us some venison, applesauce, Lipton tea packets and kind words.  It’s awesome to encounter such generous and helpful people.

The winds have been strong in recent days but we have persevered.  Winnipeg River is more difficult than I expected.  I am expecting the lake to be darn near impossible so hopefully I continue to be wrong in my assumptions.

Lunch was summer sausage and parmesan cheese in tortillas, and we completed the meal with some dark chocolate, which was lovely.  Happy to have all the dams behind us…no more portages for a while.  We’re all nervous and excited for what Lake Winnipeg holds.

Dinner was venison and mac & cheese with sausage and pemmican.  Camping on private property owned by some Canadian tech company.  I had to find a hole through the barbed wire fence in order to get to a gas station to pick up t.p. and hand lotion.  Everyone is exhausted, but morale is high.  We are in a groove so to speak.  My wrist is feeling better but still not 100%.  I am beginning to fear long term damage given our pace and tripping style.

Fingers crossed for a warm/calm day tomorrow.  We still have very far to go.

Woke up to a relatively warm morning and the rain had subsided during the night. The wind, however, was still gusting from the north, an element that would prove to slow us tremendously throughout the day. We pushed through a ripping side-wind at Native Lake and another sneaky long portage around a dam. At the end of the portage we stared down a large headwind from the north. Without the current to help us we would surely have been wind-bound. We pulled over for lunch at a park in Lac du Bonnet, also sandbagging a local’s favorite fishing spot.

We pushed as far as we could but were eventually shut down by the open section of lake north of the town. While waiting for the wind to subside we ran into some heavily accented locals who congratulated us on our journey. As one of them put it, “You guys are just going for it, huh?” Camped a few hundred meters to the south within sight of an air field.

On the water at 6:00 a.m., we are getting marginally faster each day. We started the morning with a short stretch to the dam. The workers were nice enough to let us portage through their site as a short cut. The weather and scenery were beautiful today, but the winds blew hard. Luckily, the swift current of the Winnipeg River kept us moving at a decent pace.

We started looking for camp at 6:30 p.m. and found a small site within the hour. However, Axel and Paul looked around the corner to find a paradise campsite with infrastructure. Unfortunately, the other two boats had already unloaded. Paul waved us down and we reluctantly agreed. The campsite was worth it though.

Today was the toughest day yet, and the first day we really earned 6,000 plus calories.
-Bram 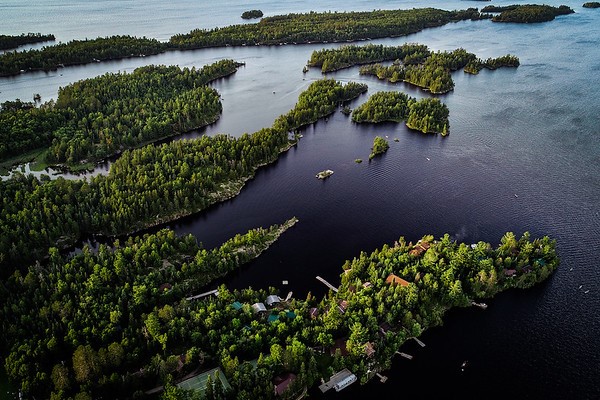 Where do you start”? Everyone asks us late into the night, to which we reply “THE SOURCE!” Camp Kooch-i-ching, a wilderness tripping camp in the Boundary Waters. It is there we all met as boys, discovered our love for the outdoors, and became friends with other amazing men and women who have inspired us, through their own adventures, to embark on this trip.

For these reasons, we begin at the source.

It’s pretty much North from there.